Whether we are designing, troubleshooting or just reading about Wireless LANs, we come across the catchword ‘ACI’ (Adjacent Channel Interference).
While most people are familiar with the concept of Overlapping ACI in the 2.4GHz frequency band (‘Don’t use Channel 1 and Channel 2 in neighboring BSSes, because they overlap’ or ‘Only use channels 1,6,11′), the Nonoverlapping ACI is the 2nd and lesser known form of ACI, and impacts not only the 2.4GHz frequency band, but 5GHz aswell.

In the 2.4GHz frequency band, overlapping ACI is our daily enemy. The individual channels in this frequency band are separated by only 5MHz (starting at channel 1 @ 2412MHz), but a WiFi channel is at least 20MHz (or 22MHz for 802.11b) wide, so you basically have only channels 1, 6 and 11 available that are not overlapping (some might argue that 1, 5, 9, 13 is an option aswell with OFDM):

When you place neighboring APs on overlapping channels (for example channel 1 and channel 3), you make it impossible for them to properly follow the arbitration process (DCF, ‘Distributed Coordination Function’ or EDCA, ‘Enhanced Distributed Coordination Access’):
The first step in the arbitration process is to check whether or not the medium is clear via physical carrier sense (CCA, ‘clear channel assessment’), which on one hand listens for 802.11 preambles (SD, ‘signal detect’), and on the other hand listens for other RF transmissions that it can’t interpret (ED, ‘energy detect’) . Preambles can be decoded at ~4dB above the noise floor, while the ED kicks in at 20dB above the SD threshold. As an example, if you have a noisefloor of -94dBm and a STA detects RF energy at -70dBm, it will not be able to go past the ‘CCA’ part of the arbitration process.

Think of a political rally where two competitors have a booth in the same room (‘overlapping channel’), but one is extremely loud (‘24dB above noise floor’): The second guy has no chance to talk (‘transmit frames’); he is basically a victim of a DoS (Denial of Service) attack. If they would change it into a discussion and let each other take turn (‘follow the arbitration process by being on the same channel’), both would get equally shared timeslots to speak (‘airtime to send frames’).

Or even better: If they would be in two separate rooms (‘nonoverlapping channels’), both of them could recitate their agenda without having to share the stage (‘airtime’) at all.

So why do these ‘nonoverlapping’ channels (despite the name) still interfere? The 2nd type of ACI is noticeable when you look at the ‘Transmit Spectrum Mask’ of a WiFi OFDM signal. A 20MHz-channel does not just ‘stop’ after 20MHz (green) – there are ‘sideband lobes’ (red) that bleed into the neighboring channels:

At a first glance, this might seem like a lot. But if you for example see a neighboring AP at a signal strength of -40 dBm, a reduction by 20 dB (resp. 28 dB) is still a signal of -60 dBm (resp. -68 dBm), thus impacting the energy detection (ED) of STAs on neighboring channels during the physical carrier sense mentioned above.
You can perfectly see the impact when you do a spectrum analysis on a heavy loaded channel: This busy 52@20 MHz channel bleeds into the whole UNII-1 and UNII-2 band in close proximity of the AP:

Or to use the political rally analogy again:
The two politicians are now in separate rooms (‘nonoverlapping channels’), but they can still hear the other person from the other room (‘neighboring channels’) through the walls. If the politician in one room (‘neighboring channel’) speaks too loud, the other one has to stop talking (‘energy detection during CCA’) because it is too noisy. In order to avoid this interference, the two conference rooms should be farther appart from each other (‘place APs farther appart from each other’) or move one group to another conference area (‘not using adjacent channels’).

Nonoverlapping ACI has its biggest impact in areas where multiple APs are in close proximity, on neighboring channels and the airtime utilization is high:

To reduce the impact of nonoverlapping ACI, you should:

Introduction It all started with people telling me that when they were gathered in a meeting room, everybody loses their connection to […] 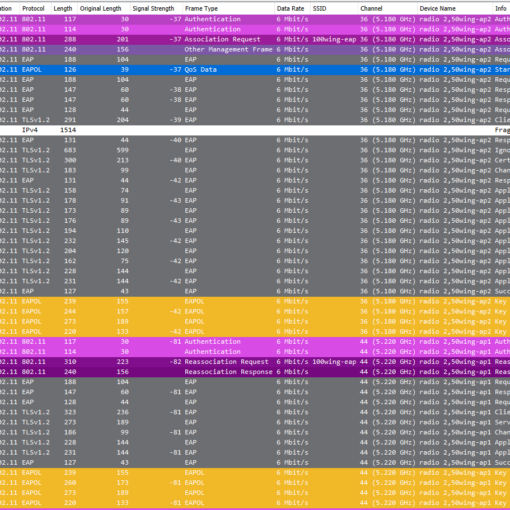 Normally when you troubleshoot roaming issues, you have to go on-site with a multi-channel packet-capture device (for every channel you want to […] 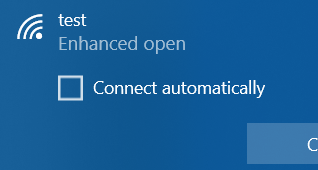 Back in spring 2019, Windows 10 introduced support for WPA3-Personal with its version 1903 update.Almost exactly one year later, they now also […]

Introduction Some of our customers have their offices in multistory buildings with other neighboring companies and residents. As most of you are […]